Upon viral infection, an arms-race between the cellular intrinsic innate immune system and viral replication is established. To win this race, viruses have established multiple strategies to inhibit the cellular response. Mammalian reovirus (MRV) constitutes a great model to study pathogenesis and life cycle of dsRNA viruses. It replicates in the cytosol of infected cells by forming viral induced-replication compartments, or viral factories. Little is known about the strategy used by MRV to evade the cellular intrinsic immune system. In this study, we unraveled that MRV induces a replication-dependent global reduction in interferon-mediated antiviral immune response. We determined that although MRV leads to the activation and phosphorylation of interferon regulatory factor 3 (IRF3), the nuclear translocation of IRF3 was impaired in infected cells. Additionally, we showed that MRV does not degrade IRF3 but sequesters it in cytoplasmic viral factories. We demonstrate that the viral factory matrix protein μNS is solely responsible for the sequestration of IRF3. This finding highlights novel mechanisms used by MRV to interfere with the intrinsic immune system and places the viral factories as not only a replication compartment but as an active strategy participating in immune evasion. 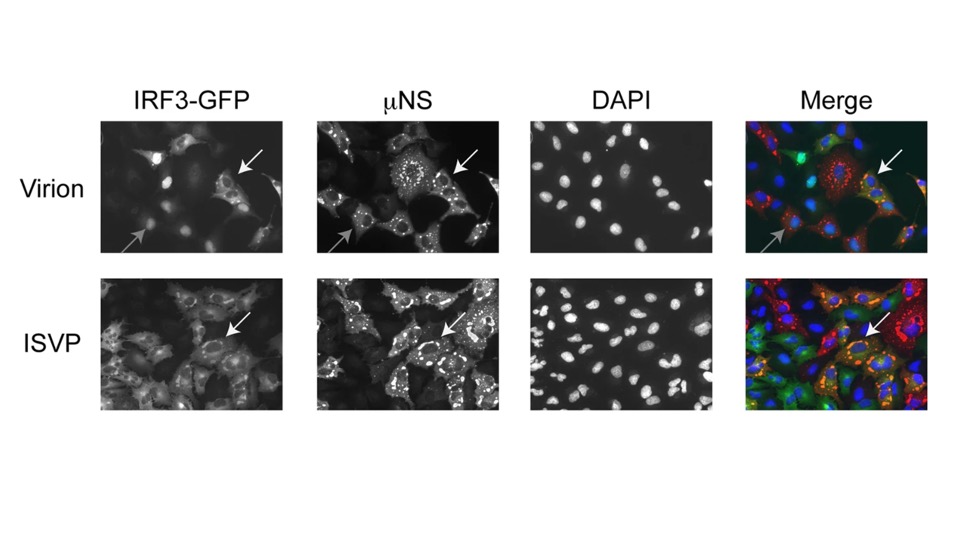