Reovirus replication occurs in the cytoplasm of the host cell, in virally induced mini-organelles called virus factories. On the basis of the serotype of the virus, the virus factories can manifest as filamentous (type 1 Lang strain) or globular structures (type 3 Dearing strain). The filamentous factories morphology is dependent on the microtubule cytoskeleton; however, the exact function of the microtubule network in virus replication remains unknown. Using a combination of fluorescent microscopy, electron microscopy, and tomography of high-pressure frozen and freeze-substituted cells, we determined the ultrastructural organisation of reovirus factories. Cells infected with the reovirus microtubule-dependent strain display paracrystalline arrays of progeny virions resulting from their tiered organisation around microtubule filaments. On the contrary, in cells infected with the microtubule-independent strain, progeny virions lacked organisation. Conversely to the microtubule-dependent strain, around half of the viral particles present in these viral factories did not contain genomes (genome-less particles). Complementarily, interference with the microtubule filaments in cells infected with the microtubule-dependent strain resulted in a significant increase of genome-less particle number. This decrease of genome packaging efficiency could be rescued by rerouting viral factories on the actin cytoskeleton. These findings demonstrate that the scaffolding properties of the microtubule, and not biochemical nature of tubulin, are critical determinants for reovirus efficient genome packaging. This work establishes, for the first time, a functional correlation between ultrastructural organisation of reovirus factories with genome packaging efficiency and provides novel information on how viruses coordinate assembly of progeny particles. 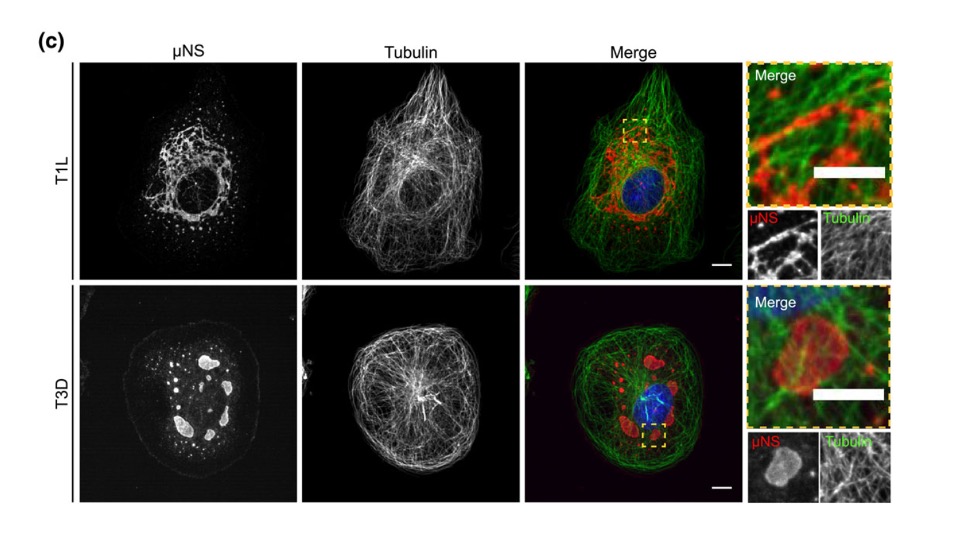