It is currently believed that type I and III interferons (IFNs) have redundant functions. However, the preferential distribution of type III IFN receptor on epithelial cells suggests functional differences at epithelial surfaces. Here, using human intestinal epithelial cells we could show that although both type I and type III IFNs confer an antiviral state to the cells, they do so with distinct kinetics. Type I IFN signaling is characterized by an acute strong induction of interferon stimulated genes (ISGs) and confers fast antiviral protection. On the contrary, the slow acting type III IFN mediated antiviral protection is characterized by a weaker induction of ISGs in a delayed manner compared to type I IFN. Moreover, while transcript profiling revealed that both IFNs induced a similar set of ISGs, their temporal expression strictly depended on the IFNs, thereby leading to unique antiviral environments. Using a combination of data-driven mathematical modeling and experimental validation, we addressed the molecular reason for this differential kinetic of ISG expression. We could demonstrate that these kinetic differences are intrinsic to each signaling pathway and not due to different expression levels of the corresponding IFN receptors. We report that type III IFN is specifically tailored to act in specific cell types not only due to the restriction of its receptor but also by providing target cells with a distinct antiviral environment compared to type I IFN. We propose that this specific environment is key at surfaces that are often challenged with the extracellular environment. 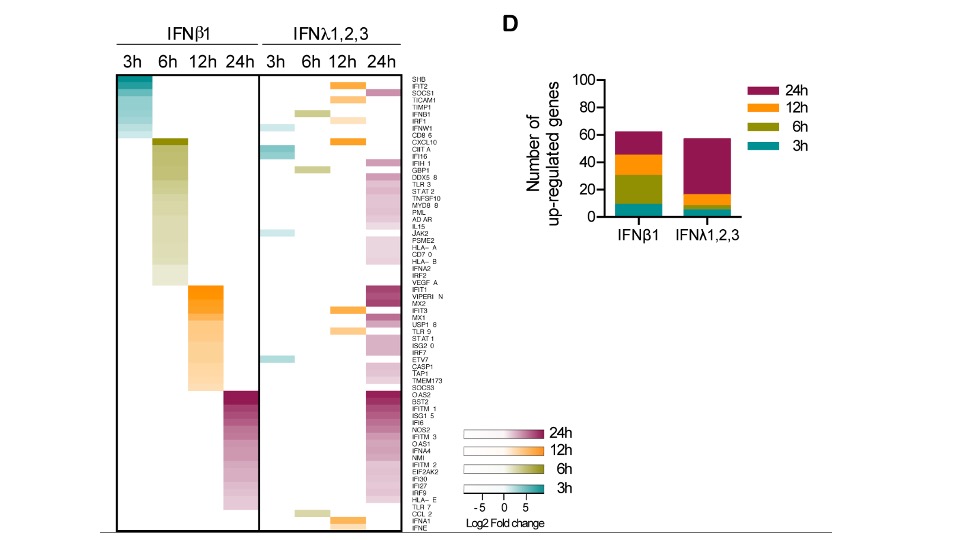